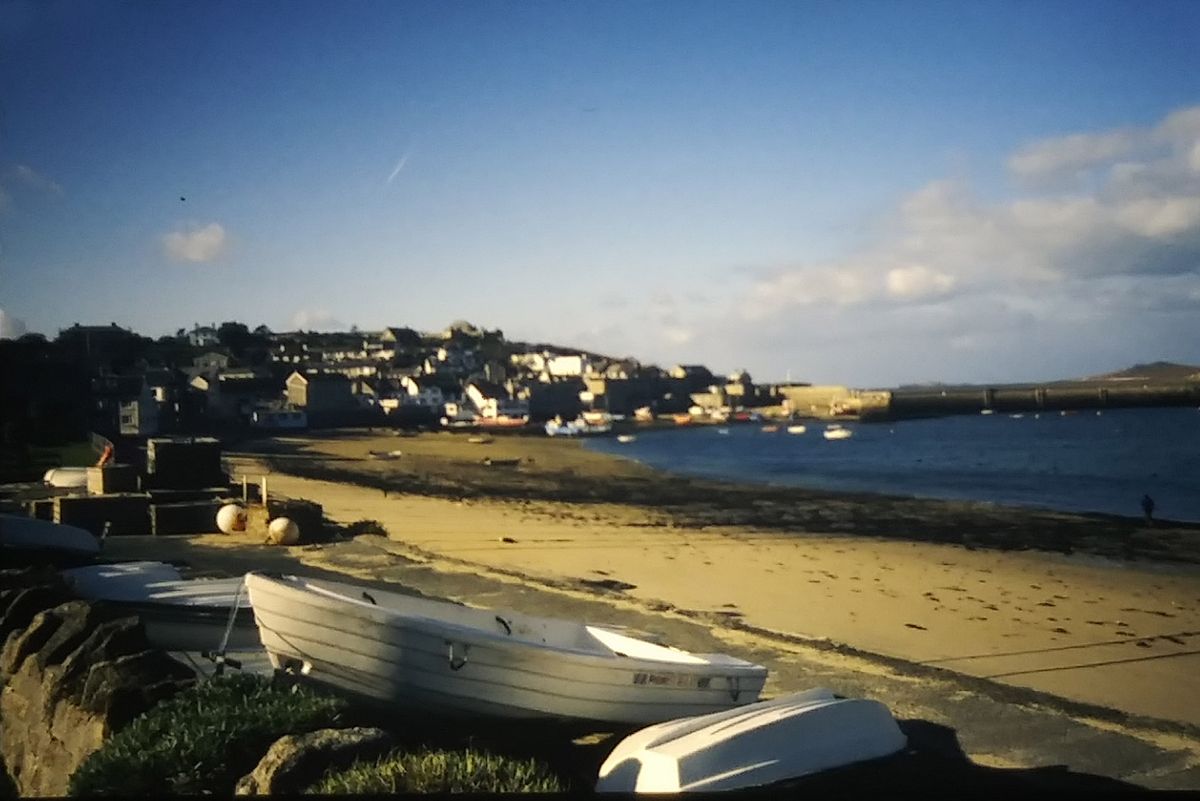 I did my first load of Scillionian laundry today. It was a project that had to be timed with the weather in order to make the outdoor drying of clothes a viable possibility. Today the sun was out and there was a fresh breeze blowing. Hans knocked at the door to inform me that conditions were optimal. He showed me to the washing machine, one that Jon had rerouted as it was on its way to the dump (ahem--resources field...) and then rebuilt. He pointed out the ratchet strap around the outside of the machine, that helps keep the door closed and recommended that I avoid the high-speed spin cycle on account of the thing possibly destroying itself. Ha—a free washer is a funny washer, it seems.

I proceeded with due diligence and everything held up fine. Then it was time to hang my laundry out on the clothing line, here played by a decommissioned electrical cord strung across the length of the yard from barn to shed. I use “dry” here only in the relative sense. I was in a parka, wearing gloves and hanging my clothes in 50˚F weather in a part of the world where the sun sets at 4:30 in the afternoon. My only real hope was that my clothes would be less wet than when I put them up there. I hung them, propped up the line at the middle with a long pole, and hoped for the best.

There’s so much I haven’t written about yet... Phillip, for one. He moved in the day after I did and I’m still not sure what to make of him. His largest feature is his intellect (honed at Cambridge) which he wields with zealous determination. He paves the social landscape, maps out proposals, and sets foundations with a vision towards building a great new future. I stand back in amazement. Nothing can escape his laser focus. Everything is scrutinized. Some things are leveled. Some are spared.

As I said, I don’t know what to make of him yet. He’s a nice guy but a complete brainiac and perhaps takes himself a bit too seriously. Am I any better? I think the description that Beth would proffer is “Turkey” (pronounced tuuuuuuur-key!) which makes me smile. What I observe: He appears to knead bread without feeling. He cooks without spices. Ah—I’m being too harsh. And who knows what people say about me when I’m not around? Phillip is all right. We have a good laugh now and again. And I believe his intentions are good.

Other highlights from the past week: unbeknownst to me, last Thursday, the 11th, was Remembrance Day here in Britain. It’s very similar to our Veteran’s Day except for one little twist. At the exact moment of the anniversary of the Armistice at the end of World War I, at 11:11am, the whole country stops to observe two minutes of silence in honor of those fallen in battle. At 11:11am that particular morning, I was over on St. Mary’s, Scilly’s main island, running around trying to get everything done in the short window of time before the boat was to head back to St. Agnes. I was walking down the high street when a rocket went up with a hiss in the sky just behind me. I turned around in time to see a little white puff of smoke and hear a massive boom. “Shit, that’s weird,” I thought, going down a laundry list of possibilities: “kids, model rocket, fireworks… blank… oh well, never mind” and kept walking.

Moments laters I forced my way through the door of the supermarket, arms full of shopping, jingling the little shop bells. “Les’see...bread, where’s the bread?” Just then I happened to look up and was overcome with the feeling that I was in an episode of the Twilight Zone. Everyone seemed to be standing really still. “Funny...” I thought and kept my mind on two things: my time window and bread. Scanning the aisles. Scanning the aisles. Another quick glance around… Everyone really was standing perfectly motionless. A yawning gulf of uneasiness opened up around me as my brain went into overdrive trying to make sense of the strange people in my new home.

Luckily one of the synapses in my brain, that had been paying attention earlier in the day, plucked the words “two-minute silence” from an earlier background conversation and lobbed it to the forefront of my consciousness. It exploded there with a bang and I froze, embarrassed, noting that I had been standing next to the bread aisle the entire time.

Wow, it worked! My clothes were dry! Or were they? My canvas, Cornish fishing smocks were as stiff as boards. At first I wasn’t sure if they were dry or just frozen. Hard to tell. As it was well above freezing though, I pronounced them dry by default. The “laundry pole” did give the line a good bit of lift and the wind up there must have done the trick.

Allow me fill you in on this urgency around bread. There is one bakery on St. Mary’s that supplies the off islands with bread, all except for St. Martin’s because they’ve got their own bakery. This year though they’ve decided to close up shop for the winter, leaving everyone breadless. Recently bread from St. Martin’s, an island on the other side of the archipelago, has been making its way over to St. Agnes. Before that, however, we resorted to making our own. It's good fun. I’m surprised how easy it is. Flour, water, yeast... rise... bake—that’s it. You can also throw in extra bits, if you’d like to spice the thing up. I baked mine with a few gobs of honey from James Ross’ farm. It was my first try at baking and I was happy with the results. Having the Rayburn helps too because it’s just the right bread-rising temperature. The Rayburn is funny. We sometimes refer to it as the Warm-i-tron because that’s all it does. That’s useful though, it keeps towels warm. It dries dishes and socks, boots too. It’s a great piece of equipment really. Today we even cooked with it. Phillip put in a squash at around 3:30 p.m. and I joked that it’d be ready by spring. But lo, by dinner ‘twas squash we had, and it was good too. But anyway, bread, it’s good stuff. People have been baking it for thousands of years. Connection through the ages, you know what I mean.

This is also the first time that I’ve eaten food cleverly disguised as plants growing in the wild. Phillip and I will be walking and he’ll pick something off of a bush and say, “Try this.” Reactions vary. When he and Ben and I were on Gugh the other day, he offered Ben a few small, yellow flower petals saying, “It’s really great. It tastes very much like a combination of almonds and coconut.” Ben popped them into his mouth enthusiastically, chewed for two seconds, then spat them out even more enthusiastically. So Phillip says, “Yeah, I guess people really love them or really hate them.” Ben must have spat over half the island as we walked home.

So you can perhaps understand my wariness when Phillip suggested that we go and gather sea spinach one night. But I was curious, so we went. It was one of those typically cloudy nights when the wind wouldn’t let up. We walked to the flats at the north end of the island, flashlights in hand, to hunt for the elusive sea spinach. I don’t know if that’s what the rest of the world calls it, but that’s what they call it here. It wasn’t actually that elusive. We found it growing there in the last bit of soil before the coast, enjoying the wind and the wet I suppose. Flashlight in hand turned into flashlight in mouth as I tried to hold the bag open, keep my back to the spray, all while searching for the most young and tender leaves (guided the adjectives I remember seeing on pre-packaged spinach back home). This all while listening to Phillip talk about “distributed working models” and “action-learning sets” over the rush of the wind. Our efforts paid off though. Between us we’d managed to collect a plastic grocery bag full. We got back home, rigged up a steamer, and cooked our crop. The leaves were really full and firm for spinach. I guess the sea air makes them hearty. If any of you come over, I’ll make you some.